Getting high on music

I just bumped into the FB wall of my former student, Aleix. I hit the link: http://www.youtube.com/watch?v=A4FfXHUEH94&feature=share then I just found myself checking more about it:


Yep as they told on their profile they are twins and God their voices are really soothing and comforting. Now that the weather is breezing cold and this lazy weekend night will really make me hook into nice kind of music.

So for a li'l background 'coz you might wonder they look Korean, yes they are, but they were born and raised in Australia.

They do have their own channel: http://youtube.com/jayesslee You may want to check and find out what I am talking here.


I love Tamia for the song Officially Missing You. Js' remake would make you hit more on their other uploaded videos. Some of my favorites were Price Tag by Jessie J, Just The Way You Are of Bruno Mars and Fireflies of Owl City.

Then when I posted the link on my facebook, there were comments posted that they love these twins! Oh well, I hope I can check out more of them.

But now I'll be looking more for some good old time music like this: http://www.youtube.com/watch?v=A4FfXHUEH94&feature=share.

So enjoy everyone! Have a great Saturday night!
Posted by nicole vlamfort at 7:09 AM No comments: 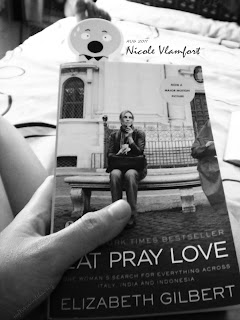 Now I'm reading
Eat Pray Love
of Elizabeth Gilbert
and I'm thirty years old.
How it surprised me
that it's about her
in her thirties!
Now, I may conclude that
books are coming and
visiting me as if
they know when
I need them.

[photo and poem by me -->Nicole Vlamfort]
Posted by nicole vlamfort at 2:06 AM 1 comment:

A Shot of Pepe 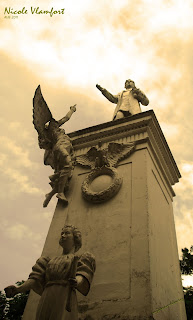 Pepe
if I will be
a hero someday
I will be
a writer too
Or maybe
my camera will
capture the
truth and reality
Posted by nicole vlamfort at 1:07 AM No comments:

If I Never See Your Face Again

Posted by nicole vlamfort at 3:52 AM No comments: 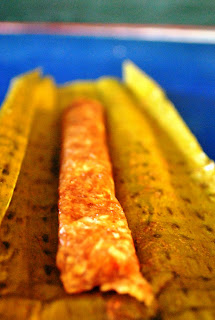 I was hooked by Palagsing. Yes, palagsing! It is not singsing (ring) or hatsing (sniff). It is a native delicacy from Butuan City.
April 10 - We went to the Butuan's market to check on whatever we can see there. We were told by the local tourist guide that we should buy this delicacy from their place. So we went around.
Two young girls under a colorful big umbrella were selling different kakanin. They immediately smiled at us and we asked if they have "pagsing" and they corrected us "palagsing". We bought two packs (5 suman in a pack) for Php20 only. It is very cheap actually.
So as we arrived in our quarters, I excitedly opened the suman and gave the others their share. It tastes like sumang balinghoy, the texture is like sago, then it has coconut strips.
As I researched in Wikipedia, Palagsing is actually made in Banza (an old poblacion in Butuan). It is actually made from Lumbiya where Unaw, the lumbiya starch, which is reaped from Palm trees. The reason why the texture is like sago and tastes like balinghoy is because of the combination of "unaw" (young coconut) and brown sugar and it was actually boiled for 30 minutes to produce its soft consistency.
I loved its taste and the others too. This is a new food that's worth sharing.
----
picture taken by me
Posted by nicole vlamfort at 7:04 PM 1 comment:

Officials Monday issued the advice as they dismissed as hoax text messages warning that radioactive fallout from crippled nuclear plants in Japan would reach the Philippines.

They urged the public to refrain from spreading unconfirmed reports and pseudo-scientific advisories through text messages, saying this causes undue panic.

Dr. Eric Tayag, head of the Department of Health’s National Epidemiology Center, said he received reports that some people wanted to smear iodine solutions on their necks to protect themselves from radioactive particles blowing in from Japan.

“Actually, potassium iodide or salt is taken to prevent cancers involving the thyroid. It displaces the radioactive iodine if that is the radioactive particle,” Tayag said at a press conference.

But potassium iodide could be useless if a different radioactive element was involved, like plutonium, Tayag said. “If plutonium is the radioactive particle, that would entail a different treatment so please don’t do foolish things,” he said.

Assuming that a worst-case scenario would happen in the country, Tayag said it was advisable to “just remove your clothes and shoes and take a shower to decontaminate yourselves.”

If radioactive particles reached the country, its components would have “decayed depending on its half-life” because of the long distance it traveled, Tayag said. Manila is about 3,000 kilometers south of Tokyo.

Although exposure to radiation is a health concern with acute and long-term effects, such a condition is influenced by several factors: the type of radioactive particles involved, the amount and the duration of exposure and the distance from the source of the radioactive leak, Tayag explained.

Early symptoms of radiation exposure include vomiting, nausea, diarrhea and fever. Symptoms for more serious conditions include headache and hair loss, among others. Chronic effects of extreme radiation exposure include cancers and genetic malformations.
“I understand where this fear is coming from ... because if you look at the map, the Philippines is just an inch away from Japan but there is really no need to panic or to worry,” Tayag said.

Dr. Soe Nyunt-U, country director of the World Health Organization, said there was no need for “undue alarm” as prevailing wind conditions showed that the Philippines was out of the path of the plume emanating from the site of the nuclear explosion.

“Even if this happens, radioactive materials won’t come to the Philippines. There are minimal public safety issues even in Japan and what is happening right now doesn’t have any implications to the rest of the members of the Western Pacific region,” Soe said.

Alumanda de la Rosa, Philippine Nuclear Research Institute (PNRI) chief, said “there is no nuclear cloud from Japan” even after the second explosion at a nuclear plant Monday morning.

Country not in danger

De la Rosa also noted that information from the nuclear plant showed that the Philippines was not in danger.

“From what we’ve been monitoring, no radiation will reach here. There will be no exposure to the public,” she said.

The 1986 meltdown in Chernobyl was placed at Level 7, which indicates a major release of radioactive materials and widespread and extended health and environmental effects.

A Level 4 incident means that there “is an accident but there is no significant effect offsite,” the PNRI official said.

In a statement on Monday, the PNRI said radiation levels in the country’s atmosphere was normal and showed “no increase” since the cooling reactors in the Dai-ichi plant broke after last Friday’s devastating earthquake and tsunami.

Should there be a complete nuclear meltdown and a nuclear cloud forms, a remote possibility for now, scientists said the plume from the site of the incident would not pass Philippine territory as of March 14, PNRI said, citing an advisory from the World Meteorological Organization.

The Philippine Atmospheric, Geophysical, and Astronomical Services Administration (PAGASA) said the winds from Japan would not travel to the country.

PAGASA chief forecaster Robert Sawi said the winds were moving west to east, or from Japan to the Pacific Ocean.

Sawi and De la Rosa appealed to the public not to spread text messages about apocalyptic scenarios. “It does not help us at all,” De la Rosa said.

She noted that the public should wait for the advisories from the Department of Science and Technology or call the concerned agencies to confirm reports.

President Benigno Aquino III met with Montejo and other officials for a briefing on the situation in Japan.

Posted by nicole vlamfort at 11:11 PM No comments: